With the GX22 and GX31, launched in 1997, Honda developed the world’s first “360-degree-inclinable 4-stroke engines” (‘mini-4’ (M4) engines) to power handheld applications; a specific market, dominated until then by 2-stroke engines.  At that time, introducing such engines was considered a technological development which was said to be impossible.

In 2002, Honda launched the second generation of engines in this category; the GX25 and GX35 with an improved power-to-weight ratio compared to the first generation of M4 engines.

Compared to 2-stroke engines, these engines were not only more environment-friendly but also considerably less noisy, had less vibration and were easier to start and service.

We have recently received many requests for a “2-hp class 4-stroke engine’’ with improved fuel economy and higher operating efficiency, as users in this power range had no alternative to using 2-stroke engines to get the job done.

Due to the intensive use of applications potentially powered by the GX50 (e.g. brushcutter in certain markets up to 6 hours a day, 5 days a week), battery power is not an option.  Even considering the “increasing’’ trend towards electrification, Honda believes there is still a market for a gasoline engine in this range since their efficiency has been greatly improved, making them one of the cleanest gasoline engines on the market.

In response to the above demand, Honda will be launching the new compact and lightweight GX50 combining excellent emission performance, low fuel consumption, low noise, and low vibration.

The GX50 has an excellent power-to-weight ratio of 0.32 kW/kg that is as good as any common 2-stroke engine but with the benefits of lower emissions, better fuel consumption, lower noise and vibration.

To emphasize its purpose the GX50 is equipped as standard with a paper air cleaner element and has adopted all the easy service items from the GX25/35 such as single bolt engine cover and easy to open air cleaner cover. 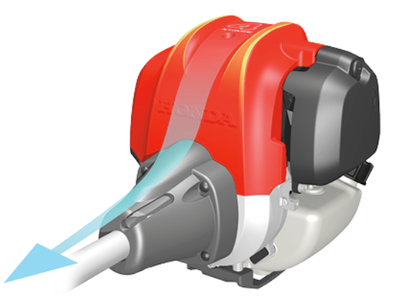 By introducing the New GX50, Honda intends to expand the customer base of M4 engines which will also lead to the expansion of GX25/35 sales.

OUR FIELD SERVICE TEAM
ARE TRUE SUPERHEROES,
EVERY SINGLE DAY

Honda Engines, always a superhero by your side

Website concept by IOTTA
Compare up to 3 engines
Compare